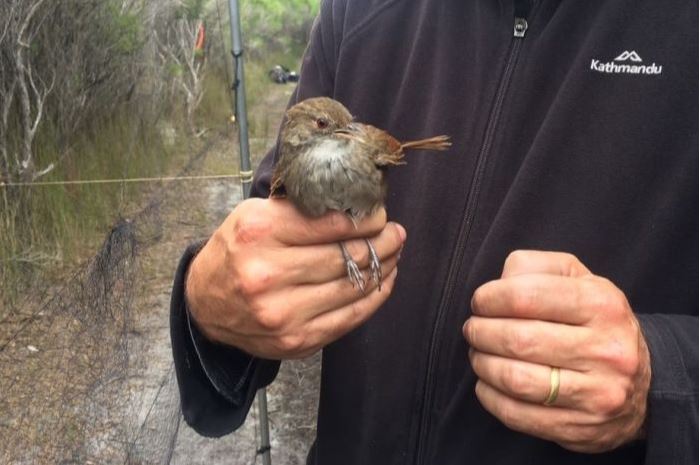 Dr Rohan Clarke, and Dr Rowan Mott from the ResearchEcology lab were recently deployed to Howe Flat (east of Mallacoota) to lead the capture of 15  of the ~160 Endangered Eastern Bristlebirds that remain in Victoria. This unprecedented action was undertaken to ensure an insurance population was safely held away from the fires that have devastated much of eastern Victoria and NSW. Along with their project partners (from Zoos Victoria, DELWP, Parks Victoria, University of Wollongong, Currumbin Wildlife Sanctuary), and supported by first class logistics teams (Fisheries Victoria, The Australian Defence Force in Partnership with Singapore Defence Force, and the Orbost Incident Control Centre), Rohan and Rowan were flown in via Chinook Helicopter and got to work.

"There were literally aircraft water-bombing the fire only a couple of kilometres away while we were working," Dr Clarke said. "It [the fire] was incredibly close; it burnt into the northern edge of the heath where the bristlebirds live."

“We were able to catch 15 birds and move them to Melbourne Zoo – an insurance population should the remaining birds at Howe Flat be wiped out by fire”, said Dr Mott.