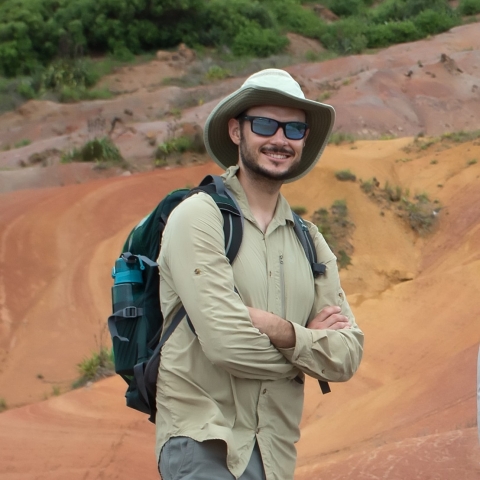 Luke completed a Bachelor of Science from the University of Wales, U.K. and a Master of Resource Management from Simon Fraser University in British Columbia, Canada, where he investigated the effects of introduced predators on nocturnal island-nesting seabirds using autonomous acoustic monitoring.

For almost ten years he has worked as an ecologist on a variety of seabird research projects in North America, including on the restoration of Ashy Storm-petrels in the California Channel Islands. Most recently, Luke developed a study that revealed the comparative migration and spatial ecology of two North Pacific storm-petrel species (Fork-tailed and Leach’s Storm-petrels) in British Columbia using geolocators and stable isotope analysis.

For several years, Luke has worked extensively at sea on board Canadian Coast Guard vessels, undertaking regular pelagic seabird surveys in the North Pacific and western Arctic on behalf of the Canadian Wildlife Service.  He has volunteered on an albatross census program on Midway Atoll on the Papahānaumokuākea Marine National Monument and as a long-term volunteer on Skomer Island, U.K. He has also participated on a variety of seabird research projects throughout the United States, Canada, U.K. and Japan.  As a member of the Research Ecology Group, Luke is studying the foraging ecology of pterodroma petrels (Black-winged Petrels and White-necked Petrels) on the Norfolk Island Group.  This research investigates several topics of seabird ecology including modelling the species’ distributions, dietary analyses, stable isotope analyses and exploring the effects of different bio-logging devices.

In his spare time, Luke enjoys keeping fit by joining friends on regular road-cycling rides, swimming and running. When his appetite for endorphins is appeased, he enjoys wildlife photography, birding and camping.