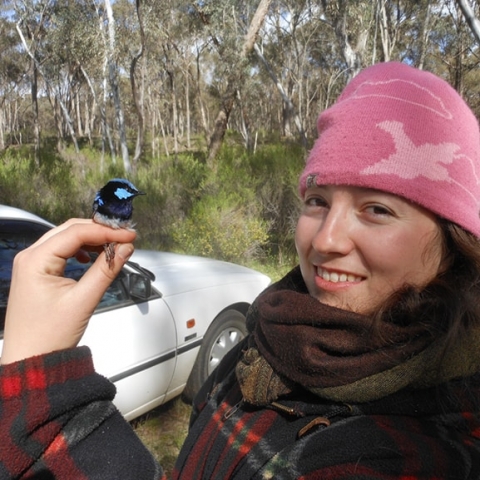 Shana completed her Honours degree at Monash University in April 2012. Her Honours project Amphibian Responses to Climate Variability in Massively Altered Landscapes was supervised by Dr Rohan Clarke and Prof Ralph Mac Nally in the Australian Centre for Biodiversity lab. Her study looked at the effects of the Big Dry (1997-2009) and subsequent Big Wet (2010-2011) climatic events on the frogs of northern Victoria. By comparing her frog survey results from 2011 with those collected previously in 2006-2007, she found that while the drought had caused steep declines in frog abundances, several common species were able to recover quickly on the return of wet conditions. Several other species did not respond quickly suggesting cause for concern about their persistence in these landscapes. This work contributes to our understanding of how sensitive taxa like amphibians might respond to further extreme droughts, which are predicted to become more severe and more frequent under climate change.

After completing Honours, Shana continued her affiliation with Monash University working as a research assistant in the Clarke and Mac Nally labs. As a research assistant, she contributed to Rohan’s research project investigating the population dynamics of pelagic seabirds in the Bonney Upwelling – an area of the Southern Ocean and an important feeding ground for these birds. Shana collated seabird counts taken over 35 years of bird watching trips to this region, for the first time creating a digital record of this unique long-term dataset.

Also during this time, Shana continued to carry out frog surveys in northern Victoria. The final results of this work will be published in the forthcoming paper: Mac Nally, R, Nerenberg, S, Thomson, J, Lada, H and Clarke, R (in press). Do frogs bounce, and if so, by how much? Responses to the ‘Big Wet’ following the ‘Big Dry’ in south eastern Australia. Global Ecology and Biogeography.

Following a short break, in 2013, Shana started her PhD studies at the Australian National University. Her project will investigate the conservation implications of land use intensification in the wheat-sheep belt of south eastern Australia. Shana’s study will focus on plant biodiversity and look at how fragmentation and a move towards intensified agriculture could affect the persistence and restoration of diverse plant communities. By doing this, she hopes to identify current and future threats to vegetation persistence and ways to improve biodiversity of restored farmland. She is supervised by Dr Philip Gibbons and Prof David Lindenmayer.