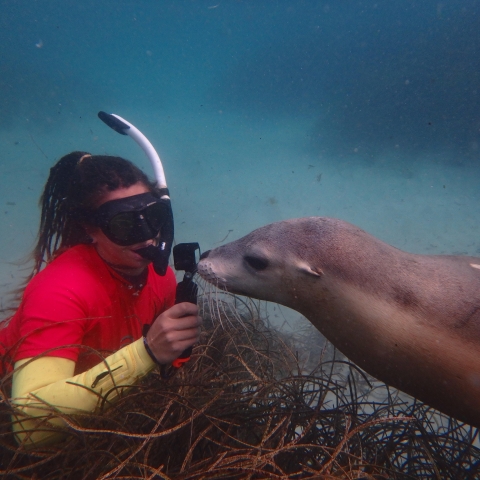 Karina began her Honours degree at Monash University in July 2017. Her project was supervised by Dr. Rohan Clarke (Monash University) and Dr. Rebecca McIntosh (Phillip Island Nature Parks). Estimating the abundance of individuals provides critical information for wildlife management and conservation. Seal pup abundance is used as an index to manage ecosystem resources (commercial fisheries and aquaculture) and helps to plan for emergency action. Pup abundance was estimated using at least five sites across Victoria, including Seal Rocks and Lady Julia Percy Island. The findings of this study were published in Ecosphere.

Previously, Karina completed a Bachelor of Science at Monash University in 2016. She majored in zoology, and ecology and conservation biology. During this time, she completed an undergraduate research project focussing on how pinnipeds (seals) evolved to become specifically adapted to life in the oceans. The project involved comparing morphological structures of the forelimbs of pinnipeds from different phylogenetic groups and how these flipper structures related to their locomotion and feeding behaviours. She has also completed an internship in South Australia, having assisted in developing a data collection program for the monitoring of the Australian Sea Lions. She also collected data relating to Great White Shark behaviour.

In her spare time, Karina enjoys surfing, snowboarding, snorkelling and hiking – more or less anything to do with the outdoors!