How much is too much? Researchers explore the impacts of oil film thickness on feather structure 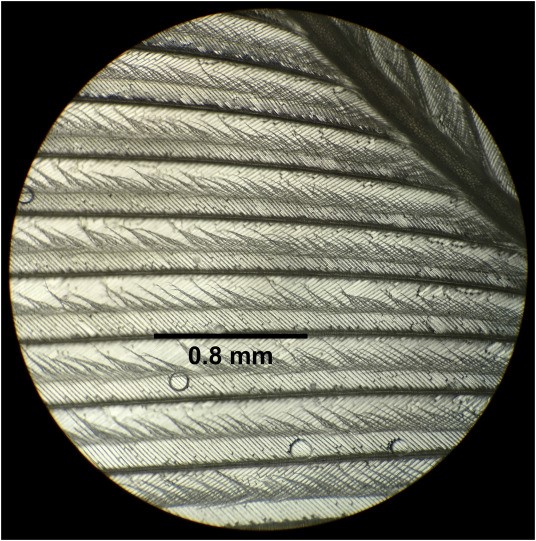 Feather fouling or ‘oiling’ is a primary cause of seabird death during marine oil spills. When a seabird interacts with the oil at the sea surface the oil typically aggregates on the feathers to reduce both buoyancy and insulation. Because different oil products and different oil spill volumes result in different oil film thicknesses, the outcomes for seabirds can vary.

Under laboratory settings, feathers of seabirds were exposed to either crude and condensate oil films of varying thickness. Feathers were then measured for changes in mass, and for changes in feather structure (specifically barbule clumping as can be seen in the image of a highly magnified feather).

We found that there was a threshold response to oil film thickness, with oil films equal to or greater than 3µm leading to increases in both feather mass and clumping. “This finding shows that very little oil is required to damage the structure of seabird feathers”, reports James Matcott. Nevertheless, when oil films are especially thin at the sea surface (i.e. < 3µm) they may have relatively little impact on feather structure and integrity.

This finding provides new insight regarding the threat that oil spills pose to seabirds. “It shows that oil film thickness is an important consideration when devising response strategies that aim to minimise further harm to seabirds and other organisms in the event of an oil spill” said Dr Rohan Clarke.