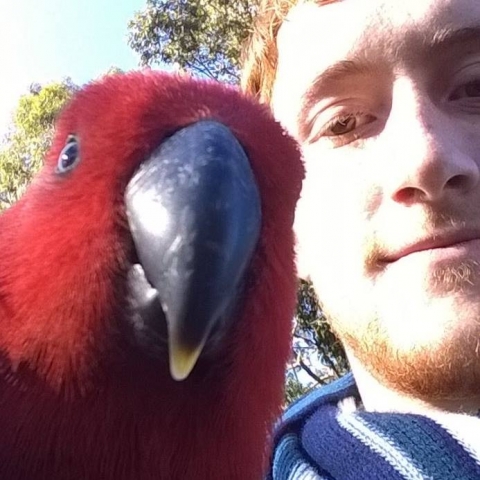 James began his Honours degree at Monash University in February 2016. His project ‘Just another drop in the sea? The effects of petroleum oil films on tropical and temperate seabird feather structure’ was supervised by Dr Rohan Clarke. A seabird’s plumage is important in thermoregulation and maintaining positive buoyancy, and by observing the changes to barbule structure when exposed to oil, James determined how tropical and temperate bird feathers respond to oil spills. By quantifying how breast feathers from diverse tropical and temperate species are affected by oil, he determined how great a factor climate and habitat are in the degree of risk that various seabirds face from oil spills.

James completed a Bachelor of Arts / Bachelor of Science at Monash University in 2014 majoring in history and zoology, and completed an Honours degree in history at Monash in January 2016. When he is not collecting feather samples from beaches or dipping feathers in oil, James enjoys fencing, playing AFL and indoor soccer, travelling to & exploring new places, and going to gigs/movies/plays with friends.