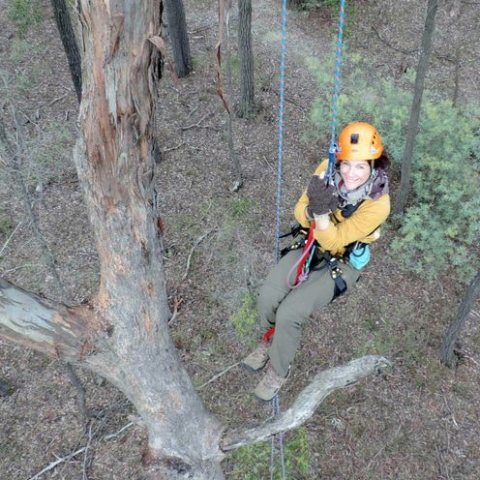 Conservation planning for the recovery of the critically endangered Regent Honeyeater

Gemma completed a BSc in animal behaviour and wildlife biology at Anglia Ruskin University, followed by a MSc in biodiverstiy, conservation and management at The University of Oxford.

Gemma commenced a PhD in 2014 through Institute of Zoology and UCL and in collaboration with Monash University and BirdLife Australia. Her project aims to understand whether management actions to recover a critically endangered Australian passerine species - Regent honeyeater Anthochaera phrygia - are working. Current population numbers are believed to be as low as 400 individuals and the species has become locally extinct in many parts of its historic range in southern Australia, primarily due to habitat loss and fragmentation. For the last twenty years the Regent Honeyeater has been the subject of an intensive and collaborative recovery programme, which has included captive breeding for release and habitat restoration. Captive bred birds have been released at different sites over the last 15 years, yet the efficacy of these is yet to be evaluated. The PhD used monitoring data from the wild remnant population and from captive releases to build population models that quantify how the population has responded to the management strategies. The information Gemma generated will be applied to continued management planning through the application of decision analytic tools such as structured decision making.

When Gemma is not following the fate of Regent Honeyeaters in woodlands in Australia, she enjoys relaxing, listening to music and catching up with friends.